Today I have made an interesting discovery: my 2008 2.4 GHz MacBook Pro is using frustrated total internal reflection (FTIR) for the illumination of its keyboard.

The background to this discovery is that I spilled a bit of salad dressing into my keyboard (pro tip: do never try to show someone the salad you are currently eating via skype) and since then some of my keys are not working reliable anymore. To be more precise: Some keys I must push two or three times until they produce the letter. Thus, I wanted to look if I could clean the keyboard and what kind of keyboard I would need if I wanted to replace it. I used the MBP iFixit guide to achieve the disassembly (and as I have been a lucky guy also the reassembly).

Anyway, when I removed the keyboard compartment from the MBP’s body I discovered that it consisted of four parts:

It consists of these four parts:

The four parts were held together by eight little bent wires.

The white Plastic Foil contains a PCB with four white LEDs that emit light into a transparent plastic sheet through the sides of four holes in that sheet:

As this sheet is transparent, light that is being emitted into it from the sides will be reflected internally endlessly because of the optical effect of total internal reflection. Anyway, if there is something printed on the transparent sheet this will cause the light to emit in that area:

These spots are lying underneath the actual keys of the keyboard. Thus, only the keys are being evenly illuminated. As the light gets weaker in the outer areas of the transparent plastic sheet more points are printed on the transparent plastic sheet in the outer regions than in the inner regions. This technique is terribly simple, very effective and dirt cheap. Brilliant, Apple!

Why do I care for this? Because FTIR is the technique with which Jeff Han brought up the hype for cheap, large multi-touch surfaces. Jeff Han is better known for his performance at the TED.

Update: When I wrote this blog entry, I was just intrigued by the nice technical solution Apple came up with this backlit keyboard. However, there are some people that can creatively apply my bit of superfluous information: Colorized MacBook Pro Keyboard Backlight by Greg Parker. 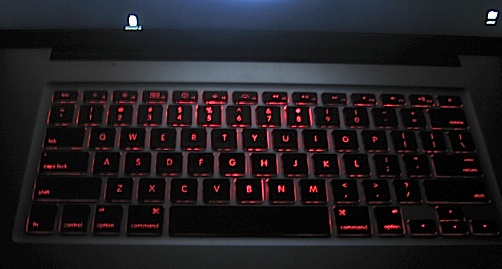 Update 2: If you are interested to see how FTIR works for illumination, you can check out this nice video explaining how LCDs work. LCDs combine FTIR with white paper sheets to rear-illuminate the TFT: