Nowadays, more and more open source projects are hosted on Github – amongst others some great Actionscript-based projects. Actually, Git makes it simple to clone and import a working project to which you can actually commit changes (at least to your cloned, local repository). However, I found it quite complicated to get from the git link to a working project in Flash Builder: I needed to consider a few aspects to get everything up and working. I want to present the approach that worked for me in the following. If you know or figure out a better way, make sure to post it in the comments! 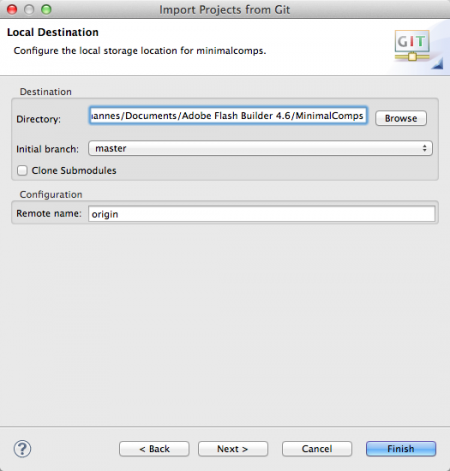 Step 5: Choose the appropriate directory and Flash Builder project name
As already mentioned in step 3, now it is important that the folder in which you want to create the new project is the same as the folder where you cloned the Git repository to and call the project with the same name as you called the cloned Git repository. In step 3, I chose to create the new project in the Flash Builder’s default location (/Users/johannes/Documents/Adobe Flash Builder 4.6) and called the folder to which I cloned the Git repository ‘MinimalComps’. Therefore, I can keep the ‘Use default location’ box ticked and have to call the project ‘MinimalComps’: 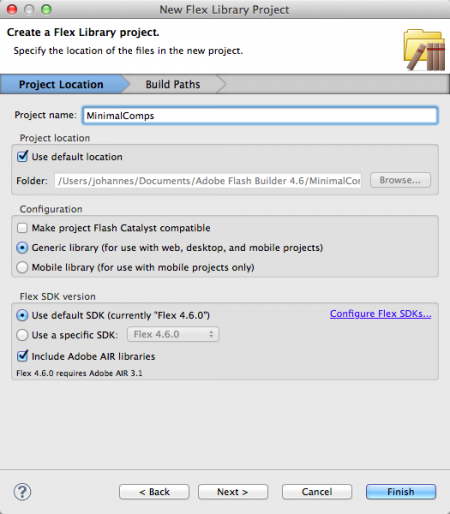 Congratulations, now you have a Flash Builder project that is bound to your cloned Git repository: