(Update: The follow-up article can be found here.)

Fortunately I’ve got some money from the Computer Science faculty of the Wiesbaden University of Applied Sciences to build another (better) multi-touch table. I decided to try Tim Roth’s DSI technology. By using this technology it should be possible to use objects on the table that can be traced by a camera just like in the reactable project.

I made a photoset of this DSI multi-touch table on flickr: 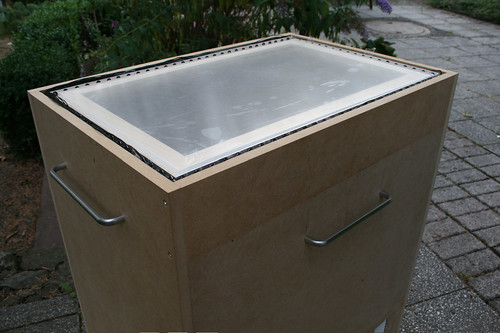 This table is especially smaller than the first one because it should be easily transportable and there is a locker in our Vislab laboratory in which the table should be fitting. The height of the table is just like the height of a dining table and the surface is 60×40 cm small which is a diameter of 28″.

One thing I’ve learnt from my first multi-touch table building experience is that I’m certainly able to build such a table but there are people who are better suited to build the actual box (maybe anything else can be done better but especially my first table was suffering from the box’s lack of appropriate carpentry). Thus, the box of the 2nd table was built by a cabinet maker. As a matter of fact this cabinet maker is an employee of my university which resulted in no costs for the building of the box.

I worked on that table together with Frederic a study mate of mine yesterday. But we have not yet finished the table: The things that are missing are a lid and paintwork, which will be done by the cabinet maker when he has returned from his holidays ;) Additionally, I have to find a solution on how to mount the mirror, which is reflecting the image of the projector onto the surface, inside the box in a way that it can be fixed and be occasionally adjusted as well. The last thing that remains to be done is to mount a projection foil on the special kind of acrylic glass, which is necessary for a DSI setup the so-called Endlighten XL Plexiglass.

Supplementary, I obtained a spare ordinary acrylic glass plate in the same size. Hence, I can easily change the glasses on the table and switch from the DSI to the FTIR technology and vice versa. Hopefully the 96 IR LED’s I used to build the table are not too much for the FTIR effect. But they shouldn’t. However, building hardware demands humility from you!